To the producers of Top Gear USA,

Now that the cat is out of the bag on Top Gear USA and its future home on the History Channel, we at the Daily Derbi are taking a moment to officially petition you to hold open auditions for the role of host on your show. To give everyday petrolheads a chance at being the next Jeremy Clarkson, Richard Hammond, or James May.

We know what you’re thinking: “These guys can’t be serious. Why should we waste time with auditions?”

I assure you we are completely serious and here is why.

Top Gear’s global success is largely due to its hosts and their personable, next door neighbor appeal. Their “small town charisma” is something that big time, well-known actors just won’t be able to establish with viewers (unless its Jay Leno). Instead, why not give some average-Joe the shot of a lifetime?

Having a complete unknown isn’t likely to compromise your initial viewership either. Top Gear is a niche program in America; loyal fans will undoubtedly be glued to their televisions to watch and compare an American adaptation, regardless of  one unknown host. In fact, we think that holding auditions for a part of a host will generate more attention for the show’s launch. I’d be more inclined to watch a program that I could be a part of instead of just a spectator.

And before you argue how risky and unconventional of an idea this is, take a look at Richard Hammond. Before becoming a Top Gear host, Hamster was as a lowly DJ for several public radio stations- hardly what you’d call silver-stardom. So after hearing of an audition for a spot on Top Gear, he went for it and now look at him! He is arguably the biggest small star in Great Britain.

In summary, we at The Daily Derbi fully support the idea of holding auditions to fill one host spot on Top Gear USA. Not all- just one. Fill the others with Adam Carolla, Samuel L. Jackson or any other A-list name you like, but give someone who truly loves cars and the motoring industry a chance of a lifetime. Honestly, what would you lose? And what about the worst case scenario where you didn’t find a single person you like? Go get Harrison Ford- he is good in everything. But just imagine if you do happen to find the next Jeremy Clarkson. Ya, we’d be pretty excited too. 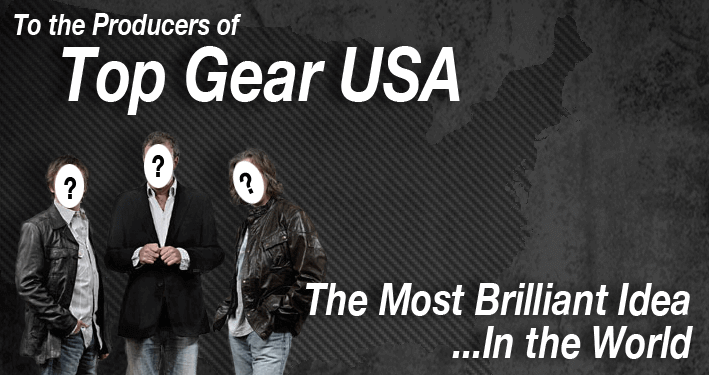