The last time I saw the Mormon Meteor III in person, the famed Bonneville salt-flats record-setter had a constellation of dried spitwads splattered across her canopy and a crushed wax-paper Coke cup sticking out of one of her 12 side-mounted exhaust pipes. This was in the early ’90s, back when this hand-built, one-of-a-kind speedster was on display at the Utah State Capitol building, where she’d been sitting for decades with no security, no surveillance cameras, nothing to keep the grubby hands of field-tripping school kids off of her except a dusty velvet rope. It was a pitiable sight… and an embarrassment to the State of Utah, which had been entrusted with the care of this treasure and had thoroughly botched the job.

That all ended in 1996 when Marvin Jenkins, son of the Meteor III‘s legendary builder and driver Ab Jenkins, reclaimed his birthright and began a years-long restoration of his father’s car. Sadly, Marv didn’t live to see the work completed. But today the Meteor III looks as ready to roll as she did the day Ab Jenkins and Augie Duesenberg finished her in 1938. She’s prominently featured in “Speed: The Art of the Performance Automobile,” a collection of 19 historic, rare, and just plain cool vintage cars currently on exhibition at the Utah Museum of Fine Arts (UMFA) at the University of Utah campus. Many of the cars in the exhibit are one-of-a-kinds or one of only a handful of examples known to still exist. From the 1904 Peerless Green Dragon up through Carroll Shelby’s 1964 Cobra Daytona Coupe, the exhibition handily illustrates the evolution of high-performance motoring through the 20th century. 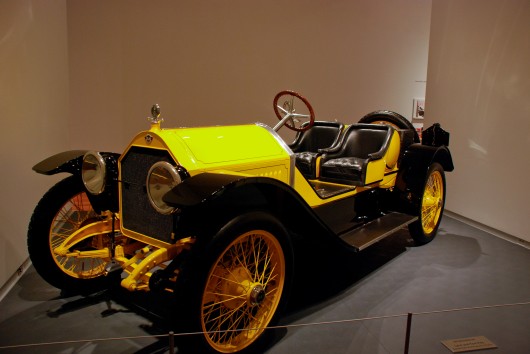 The more memorable entries for me included a stunningly restored 1916 Stutz Bearcat (seen above), once one of the fastest production cars in the world; the aforementioned Green Dragon and Shelby Cobra Daytona (seen below); and a silver 1954 Ferrari once owned by film director Roberto Rossellini, husband of movie star Ingrid Bergman and father of Isabella Rossellini. 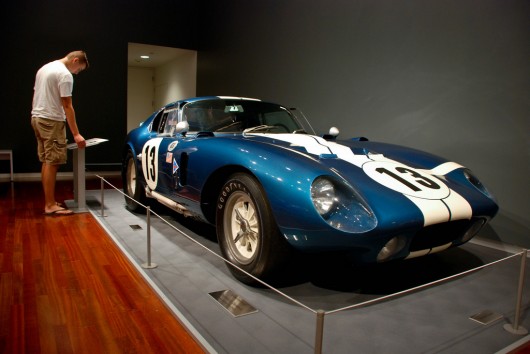 But it was the seven Bonneville racers in the museum’s main gallery that really got my heart pumping. Spanning the decades from the early 1930s through the ’70s, these unique machines celebrate the ingenuity of lone tinkerers and small teams working for the love and challenge of driving really fast. 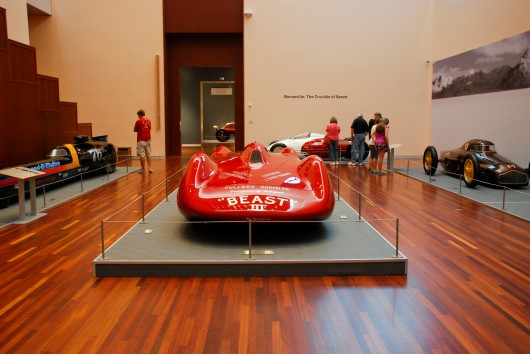 “Speed: The Art of the Performance Automobile” will only be open for the next two weeks; it closes on September 16. So if you’re looking for something interesting to do, don’t hesitate…