Ford unveiled the Galaxie in 1959 as an answer to its rival Chevy’s Impala, which had debuted the previous year. With a name inspired by the U.S.-Soviet Space Race, the Galaxie was available in two-door, four-door, and ragtop configurations, with a variety of engine and transmission options. The nomenclature gets a bit confusing starting in 1962 when the Galaxie name was applied to all of Ford’s full-size cars, including hardtop, sedan, station wagon and convertible models. The terms “500″ and “500/XL” were added to denote higher trim packages, with the 500/XL being touted as “extra luxury” and “extra lively.” In time, there would also be a 500/LTD designation, which would eventually morph into a separate line, the Ford LTD, and continue on through the ’70s as ever-larger and cushier transport barges favored mostly by retirees and pimps. Meanwhile, the last Galaxie rolled into showrooms in 1974.

As unlikely as it may seem given their size and generally tame appearance, Galaxies are sometimes considered a forerunner of the classic American muscle car, due to the lightweight, racing-spec versions built for the NASCAR competitions of the day. The racing Galaxies inspired a new variant for 1963, the SportsRoof (sometimes called the Fastback). Coming out in the middle of the production year, the SportsRoof Galaxies were the industry’s first official “half-year” model, and they’re very sought after by collectors today. 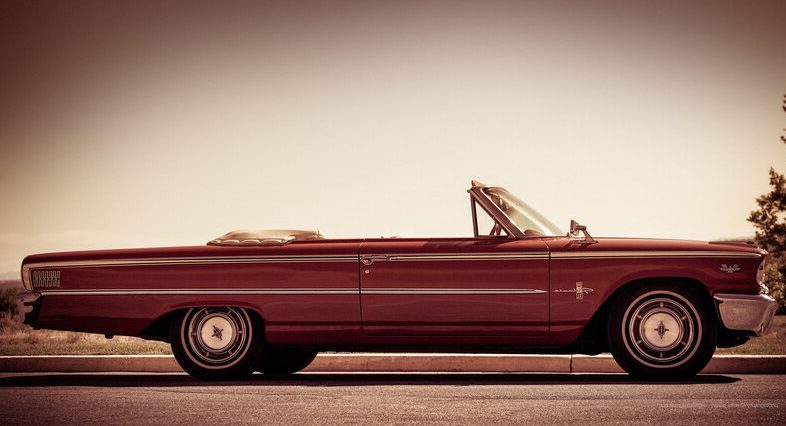 But it’s ragtops that have always seduced me. I’ve owned the Galaxie pictured here since I was 17 years old (full disclosure: I’m nearly 43 now). Sporting a Thunderbird 390 engine rated at 300 horsepower and fueled by a four-barrel carb, the old girl is no slouch when you drop the hammer, but with just an automatic transmission and a ride like oil over glass, she’s really not intended for burning up the pavement. Instead, this is the perfect summer touring machine, meant for leisurely cruises along scenic byways, and I’ve run up plenty of miles on her doing just that. This car is actually an amalgamation of three separate Galaxies, joined together during a backyard restoration by my dad and his brother in 1987. The interior layout is Thunderbird-style bucket seats with a center console, rather than the full bench seat seen in many Galaxies, upholstered in classic tuck-and-roll. As for those Lincoln hubcaps, well, they’re what Dad had on hand as we were finishing up the restoration, and they were only supposed to be temporary until we could find something more authentic. But I got used to them…